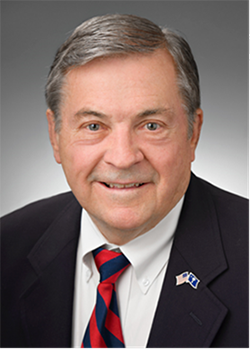 “Pete was an integral part of so many of the leadership decisions that took place here during his more than two decades of service on the MTC Commission,” said MTC President Dr. Ronald. L. Rhames. “He was a mentor, a leader, and a friend. He was a loved and respected member of the MTC family. We wanted to honor his role permanently.”

Sercer graduated from Columbia High School and earned a Bachelor of Arts in Business, a Master of Business Administration, and Doctorate in Education from the University of South Carolina. After serving more than 26 years in the Air Force, Sercer was the Director of the Irmo High School Air Force JROTC program for 22 years where he was instrumental in the creation of the Irmo High School Celebrate Freedom Gardens and Courtyard, which was dedicated in his honor.

“Colonel Sercer served his country and his community with honor and distinction,” saidSenator Graham. “He had the heart of a public servant and was a dedicated teacher and patriot. What a wonderful and fitting tribute that MTC has chosen to honor him in this special way.”

Sercer was active in the Association of Community College Trustees in many capacities, culminating in his election to serve as the ACCT National Board Chair in 2010. He was awarded the Order of the Palmetto in recognition of extraordinary achievements and service to the state and nation.

“On a personal level, Pete was a good friend and mentor to me, especially in my first years at MTC,” said Rhames. “He was a steady, calming influence and offered much appreciated sage advice to me as I grew into my role as president. It will be an honor to always see his name on the board room.”